Hello. My name is Richard and I’m a programmer at XMPT Games (AKA: the guy who does all the hard work.) I’ve been hard at work developing our new game, Penguin Party, which was released onto the PSM store this week. We’ll be talking more about the game in the next few posts, so I thought I’d take this opportunity to tell you the history of Penguin Party and how it came to be. Just over a year ago, we decided to make an earnest attempt at getting into games. However, we didn’t want to jump straight in at the deep end. After much pitching back and forth we settled on a tile-based game that used arrows to direct creatures around the grid. It had plenty of scope to sink our teeth into, but was simple enough to get started with. We had a brainstorming session and came up with two ideas:

Whilst we really liked both ideas, in the end we decided that the frantic dungeon-based concept may be too frenzied to play. Thus, we decided to opt for penguins. The name Penguin Panic was chosen out of a shortlist that included “Save the Penguins!” and “Puzzle Penguins”. After we hashed out a few more gameplay ideas, Ed went away and came up with our first concept image for the game. We’ve inserted that image below for your amusement. 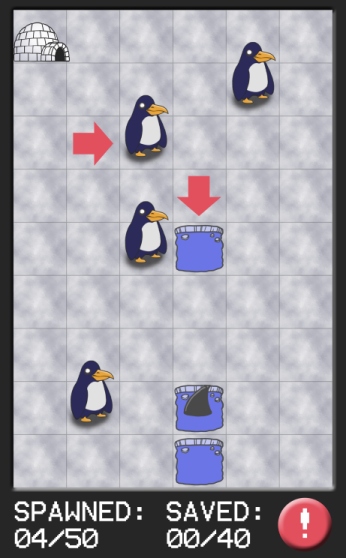 In order to ensure that we actually worked on the game, we decided to submit it into Microsoft’s annual Dream Build Play competition. With the deadline looming, we quickly went ahead expanding the penguin concept by first tweaking the artwork into the cartoon style we have today. Mechanics came next: we added new arrows and obstacles to put in puzzles, such as ice cubes that could be pushed around. We eventually moved away from requiring the player to rescue a percentage of penguins in order to complete a given level. This allowed us to have much tighter puzzles which had definitive solutions, thereby allowing us to add harder levels to the latter parts of the game. Although we were designing puzzles as we went along, we probably only had around 50% of puzzles by the time the code was completed. The following week Ed and I worked alone to create sets of puzzles. Once each set was completed, we would give them to the other person to solve. When we felt like we had a game of sufficient quality, we presented as many of our puzzles as we could at one of our weekly game design meetings. Aside from a last minute panic when I discovered a defect in the code, we submitted our game to the competition on time. You can see below what the game looked like then (Summer 2012). 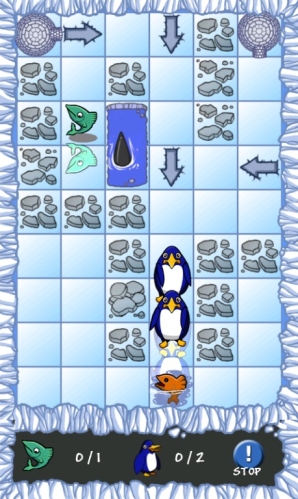 Completed look for Penguin Panic when we submitted it to the competition.

Sadly we received no feedback about Penguin Panic and we didn’t win the competition. We were not deterred though and when we officially formed XMPT Games, Penguin Panic wasn’t far from our minds. We decided there were a few things we needed to improve on:

We also decided to change platform. At the time, we had already been looking into PSM for another prototype and since a couple of the group already owned Vitas, we felt like this would be a great change and offer a fresh challenge. After a few more months of work, we finally completed Penguin Party and ended up with what see today: 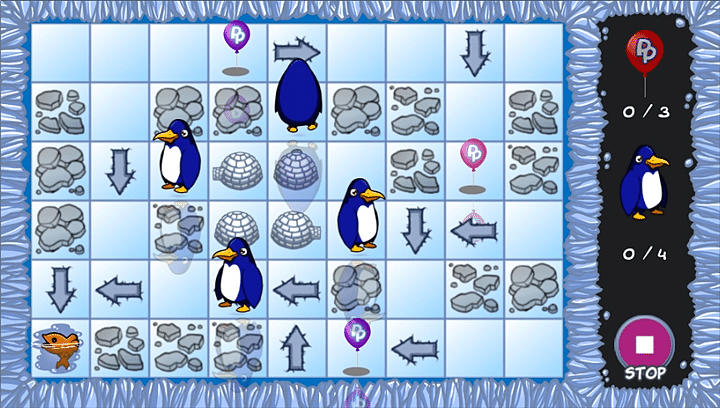 The game as it looks today. Coming soon to PSM!

We’re very proud of Penguin Party and will have a lot more to talk about regarding the project and our future plans for the title.  For now, check it out for free in the Playstation Mobile store if you’re a Vita or you own a PlayStation certified device!